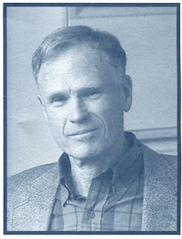 Winfred Farrington Hill (Win) died peacefully on November 6th at Buckingham Pavilion in Chicago at age 87. Win was born on May 23, 1929 in Chelsea, MA to Lura and Roy Hill. He grew up in Natick and Hingham, MA.

During the Korean War he served in the Army as a research assistant in social psychology at Walter Reed Army Institute of Research in Washington, DC.

After leaving the Army, he became an instructor at Harvard University until returning to teach at Northwestern in 1957 in the Psychology Department.  During his 37 years as a professor he served two terms as Department Chair and in 1978, he became Director of Undergraduate Studies until his retirement in 1994.  In 2006, the Department recognized his longtime contribution to undergraduate education by establishing the Win Hill Award for the best undergraduate research paper.

Win was well known in his field of learning and motivation, publishing 3 books including Learning: a Survey of Psychological Interpretations which went through six editions and was translated into several languages. He was a Fellow at the Center for Advanced Study in the Behavioral Sciences in Palo Alto, Ca in 1966-1967.  He was active in the Midwestern Psychological Association, serving as President in 1974-1975.

Known for his enthusiasm for learning, his curious mind and his engagement in thoughtful discussion, Win sought opportunities for life long learning.  After retirement, Win found a home with Northwestern’s Osher Lifelong Learning Institute (OLLI), a learning community of people who, like him, enjoyed exploring topics of interest in a setting where participants are leaders and inquiry leads the direction of the course.

Win loved history, reading, maps, boats, historic homes, canoeing, travel, riding his bicycle to and from work, and spending time with his family. He was a wonderful storyteller and enjoyed sharing stories with his children and grandchildren. He was a willing participant in his grandchildren’s make-believe games.

Quiet, kind, gentle and thoughtful, Win was appreciated for his clever sense of humor, curious intellect, and genuine interest in what others brought to the table.  He will be missed by all who knew him.

Win is survived by his wife, Libby, daughters Alison (Michael) and Linda (David) and his four grandchildren (Roi, Shirah, Rachel and Sarah).

Interment will be in Center Conway Cemetery, Conway, New Hampshire, during the summer of 2017.

Donations in Win’s memory may be made by check to the NU Osher Lifelong Learning Institute, 1201 Davis Street, Evanston, IL 60208 or online by contacting OLLI Northwestern.

For our updated office hours, visit our contact page below